Just Around The Riverbend: AppCentrica Does Grand Bend 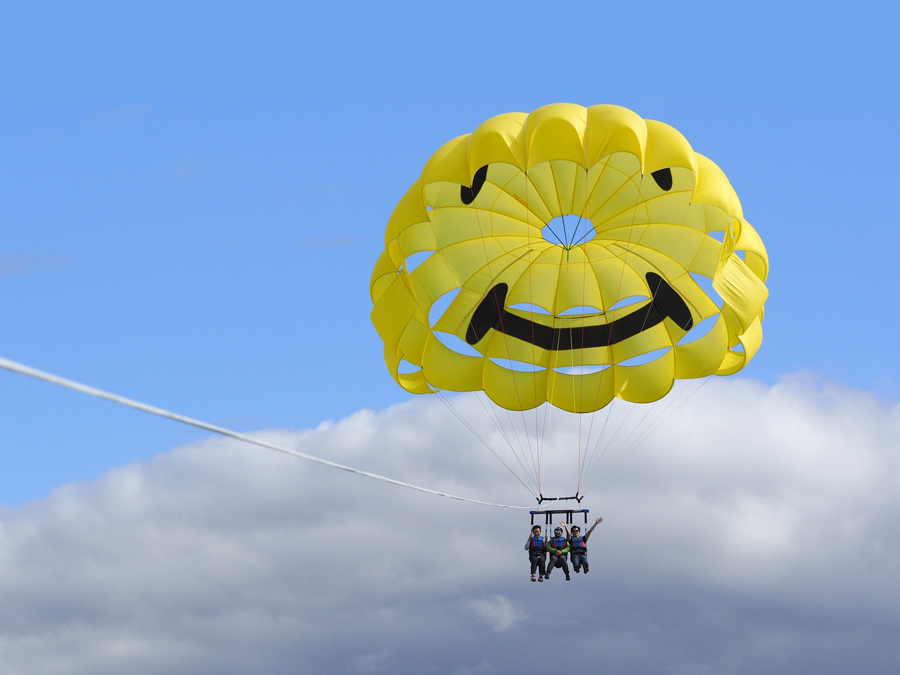 Just Around The Riverbend: AppCentrica Does Grand Bend

There was some back and forth between the management team as to who should plan the AppCentrica Fall 2016 Offsite. We have a few people who seem to miss the fall offsite due to a myriad of different reasons (new babies, weddings, etc.). The CEO thought it would be a good idea to let one of the managers who has only made it to 2 of the 5 offsites so far plan it for this year. I was a little disheartened when I heard this, because I thought I did a good job last year planning it that they would want me back at it again. Luckily, managers tend to not be do-ers. After this particular manager and one of his developers he got to sit on the planning committee did a whole lot of nothing for months, they decided to call in the expert to help with the planning (that would be me). 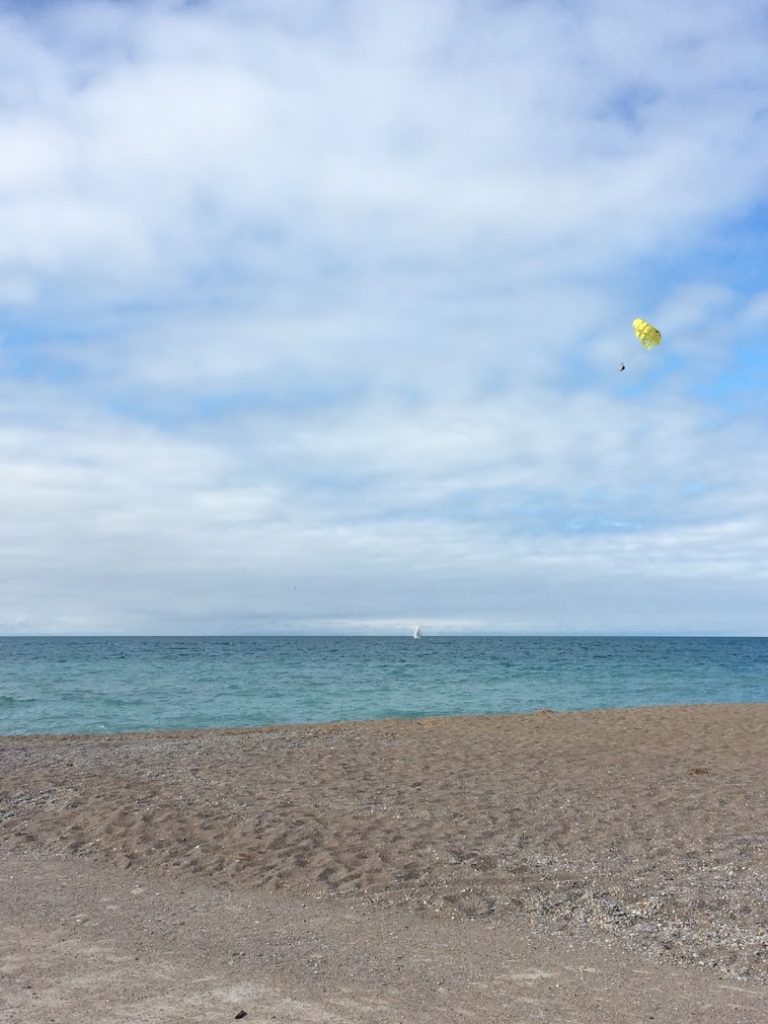 Lovely day for a parasail

At least this time I got 2-months advance notice before starting the planning. That’s 1 whole month than I had last time! Unfortunately, there was still no legwork that was done in advance. SMH. All I got from them was the guys was their tunnel-visioned location idea. Where does any middle-aged, married man want to go for 3 days to escape the woes of the day-to-day grind and get a break from their partner and/or kids? Las Vegas of course. With 2 months to go to the offsite dates, I had to crush their dreams and tell them that Las Vegas would not be possible within that time frame. So, instead we focused our attention on more local destinations. I reached out to several hotels in various locations (Ottawa, Mont Tremblant, Kingston, London and Grand Bend), and with about 27 different quotes in front of us I left the location decision to the manager. “Let’s do Grand Bend.” he said, so to Grand Bend we went. 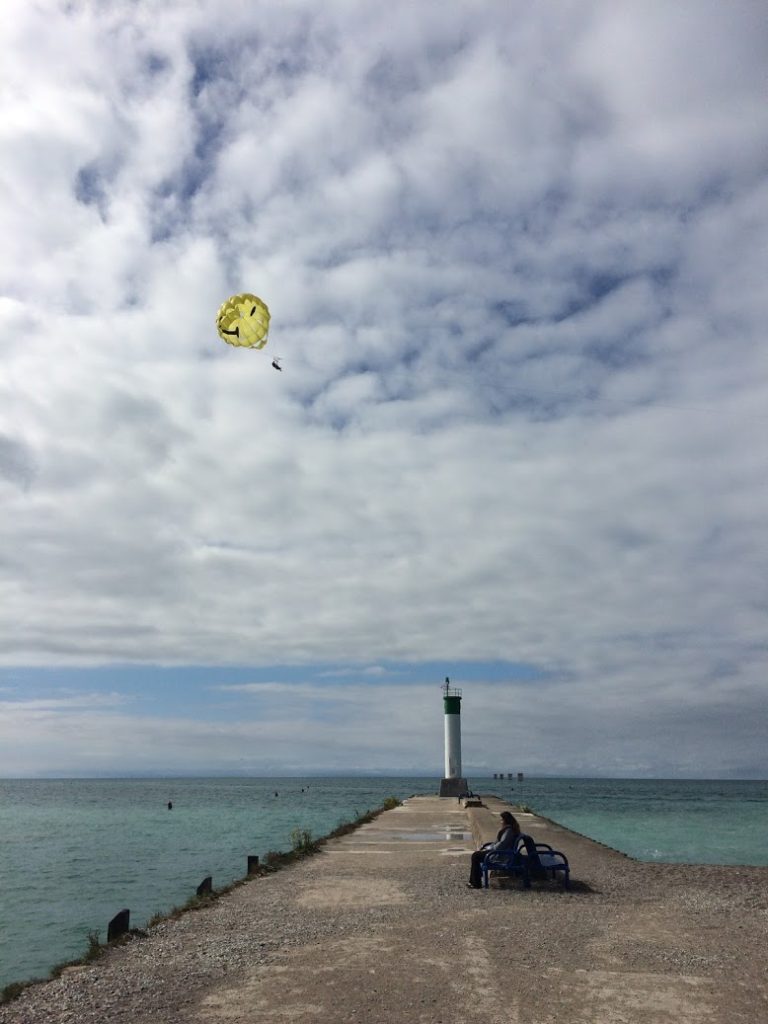 Once the location was picked, we basically only had one option for a conference location – Oakwood Resort. Being off-season, a lot of the usual shops and restaurants on the strip and different summertime activities that make Grand Bend so great were closed for the year, so we kind of dipped back into the sleepy resort town territory again for this year’s offsite. Which isn’t a bad thing! It just meant that our after-meeting social activities would have to be a little more creative and it also meant we would totally dominate the town for the 3-days. The conference details came together quite quickly, which was nice. The Oakwood Resort also offered some onsite activities we could do as a group. So we decided on one day we would just fully take over the resort and on the second day we would venture down to the Grand Bend beach. 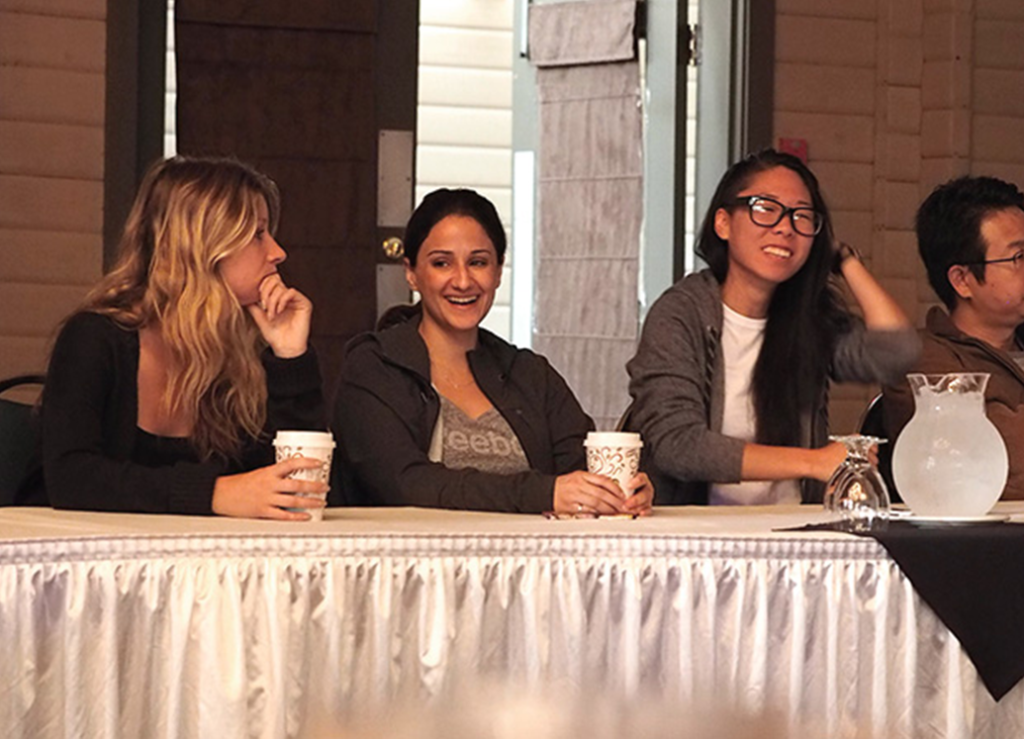 The food was much better on the resort than off the resort. Grand Bend is definitely a place better explored during the summer months than during any other season. With that said, if you ever plan on going to Grand Bend, it may just be worth it to fight the crowds during the peak season than to come during the off-season. But, it did mean that we did have a more intimate offsite that was filled with a lot more funny staff stories than fancy experiences, which is nice when the size of the company nearly doubled from the previous year. That gave us all a better chance to get to know some of the newbies to AppCentrica. Below is the itinerary of our AppCentrica Fall 2016 Grand Bend Offsite:
#AppCentricaFallOffsite2016 (Grand Bend) Itinerary

Road trip to Grand Bend with the CEO and the coolest DevBros: Hadrian and Henrique. We arrived early so we were able to stock up on some supplies before the rest of the staff arrived at Oakwood Resort for the start of our offsite. At 12pm we started off the festivities with a lunch at the resort’s dining room. After lunch we settled into our great big meeting room and we discussed what the next 5-years held for AppCentrica, shared insight around completed projects, and got to see some exciting initiatives that AppCentricans had been working on throughout recent months. After the meeting content was complete we fueled up with a quick snack before we set out on our first social activity for the weekend: the scavenger hunt. The resort coordinator did a great job sending us all across the compounds of the resort to find items on our list. The day culminated in a team cheer being delivered in the meeting room. Everyone had a good laugh over the pictures that were taken from the scavenger hunt over the dinner that we had in the dining room at the resort. After a hearty meal, we all retired to the pub and games room at the resort. A night of hilarity ensued and more than a few dollars were taken by Sasha in a nail-biting few rounds of poker.

Everyone was a bit groggy the following morning. Breakfast was very quiet. We had a record number of 3 staff members who arrived late to the meeting session the next morning (Dennis almost missed the entire thing). After sitting through more great content, we wrapped up the meeting portion of the offsite. I surprised staff with news that during the afternoon we would all get to partake in some parasailing over the Grand Bend beach in Lake Huron. I had to get a special off-season parasailing adventure arranged, but luckily the amazing folks at Grand Bend Parasail were amazing and helped me pull it off! We split up staff into groups of 4 and each group had an hour on the boat and took turns being hoisted up to parasail across Lake Huron. Surprisingly, all staff (even the ones with a crippling fear of heights) went parasailing and were all recounting stories of what a great time they had on shore. While awaiting their turn to parasail, other staff members made use of the resort facilities and played some golf or some volleyball. There was even a pickup game of soccer on the beach. After the parasailing was done, we all met up on the other side of the bridge and had dinner at Smackwater Jacks. A couple of people left after dinner to make the drive back to Toronto, so they would have the full day to work the next day. The group that stayed got to enjoy a campfire with smores, drinks and the works back at the Oakwood Resort.

Once everyone had a chance to grab breakfast we all checked out and made the road-trip back to Toronto. Not bad for an October weekend in Grand Bend. 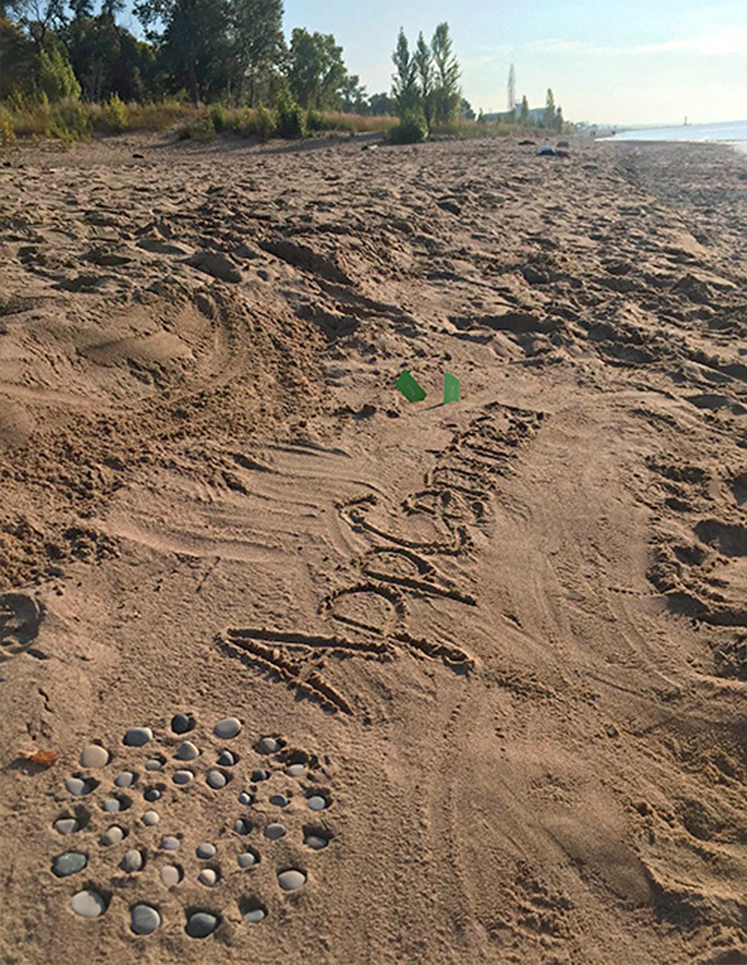 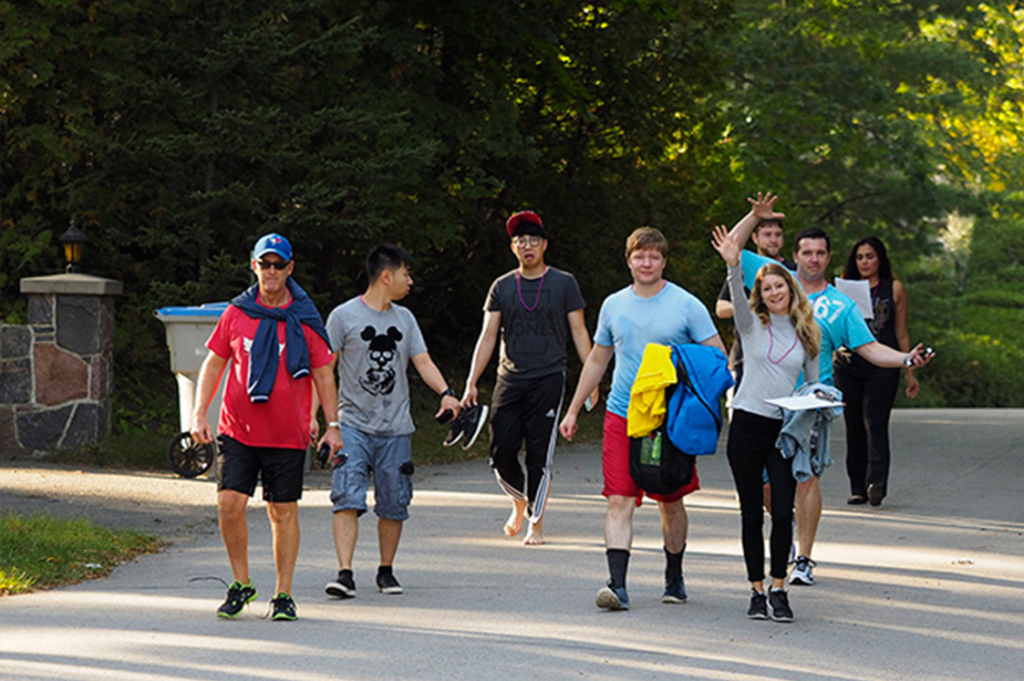 JB’s Sales-Enforcers during the scavenger hunt 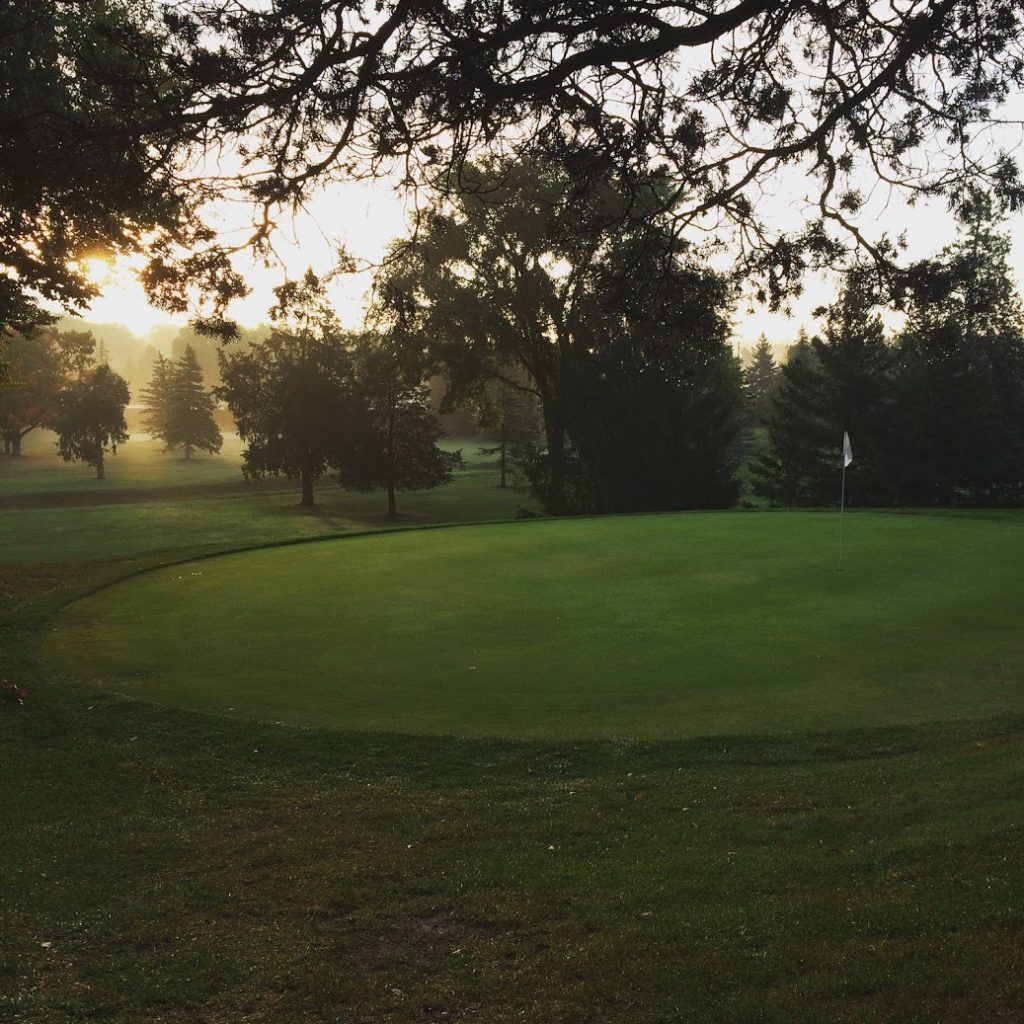 Sunrise on the golf course at Oakwood Resort

I’m glad that we arranged the offsite with the folks at the Oakwood Resort. The facilities were great and they even gave us a few suite upgrades. Some of us pooled together our suites and we made for good party/lounging rooms over the course of the weekend. The food was very good at the resort and everyone was friendly and helpful at the resort. The only downside was that their supplier of Halal meats had backed out at the last minute, so unfortunately not all the staff were able to enjoy fully Halal meals (it just meant that they ate vegetarian for the weekend). 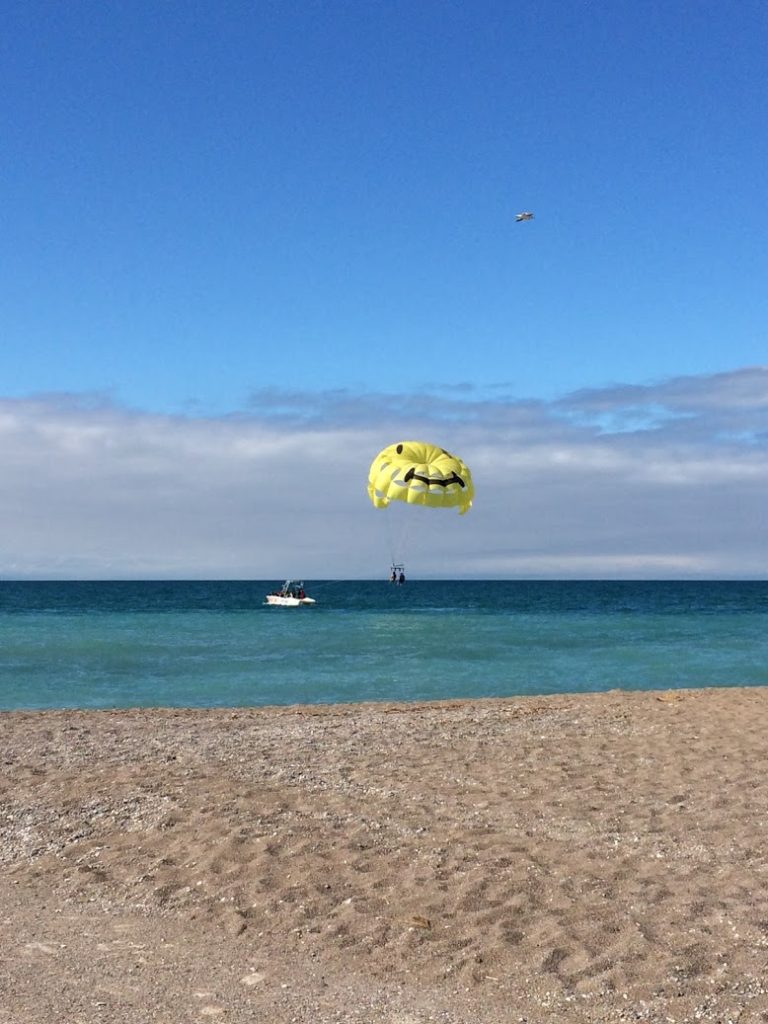 Juliana and Henrique before the dip 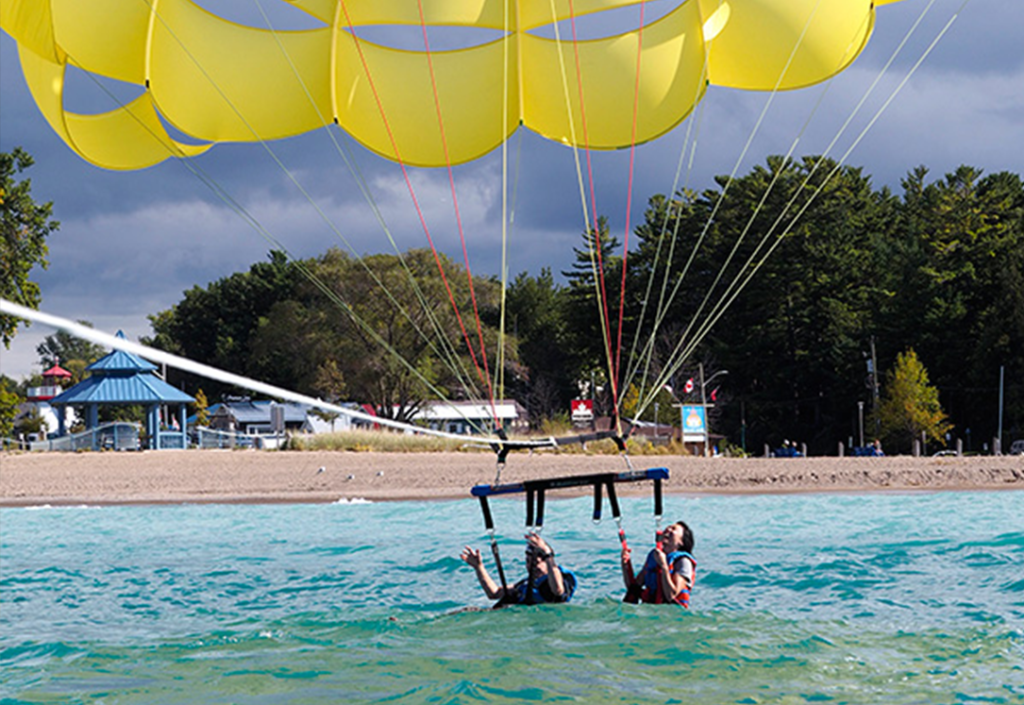 Juliana and Henrique go for a dip 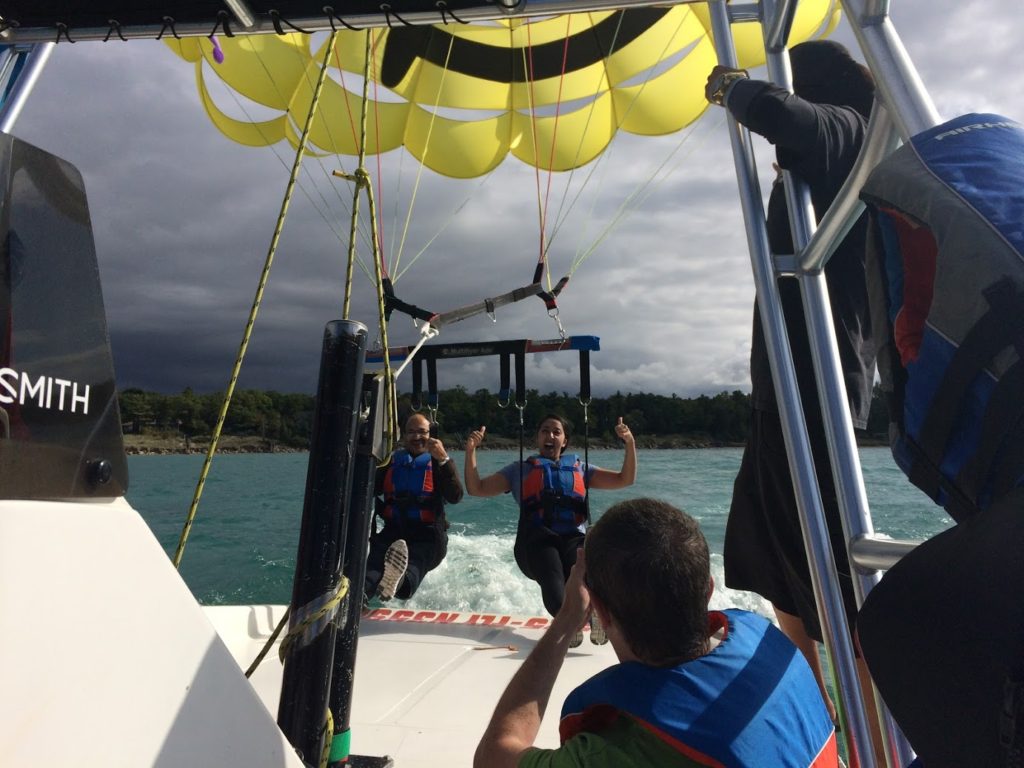 Akshay and I getting ready for lift off 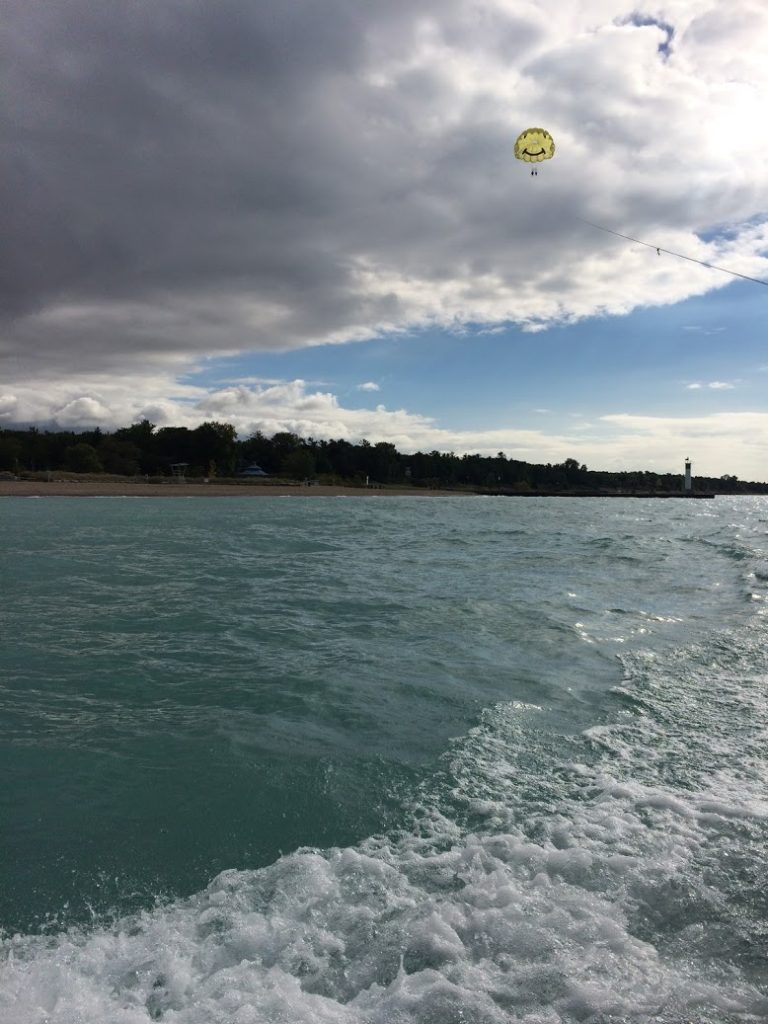 Up in the air

The staff had an awesome time on the trip. Everyone said that the parasailing was definitely the highlight of the trip. I’m so glad that lee at Grand Bend Parasail was able to work with me to arrange the event. All his staff on board were absolutely amazing that day. It was great to have the opportunity to bond with so many new AppCentrica members at the offsite. I just wish more people stayed on the second night… It caused for a bit of a heachache trying to re-plan the carpools back to the office the next day when half of the cars had left. It also sucked that we paid for empty rooms on the second night, but what can you do? It was a nice contrast to plan an offsite in a sleepy resort town rather than a city. Both have their pros and cons. I think I will claim the offsite as mine to plan for next year, so that I have more than just 2 months to plan. That way, we might be able to travel farther than just a 6 hr drive radius from Toronto. Who knows what sort of stories will come up out of an out of province, or dare I say out of country offsite? I guess we’ll just have to wait and see what next year has in store for AC.
0 Comments
Share Post